Dr. Louis W. Sullivan hands over the reigns to Dr. Pieter Pil who will lead the race next year. Mark Alan Lovewell

Many generations of racers gathered at Washington Park in Oak Bluffs on Saturday morning to prepare for the 31st annual Sullivan 5K Walk/Run and to celebrate Dr. Louis W. Sullivan, who announced that he would be stepping down from leading the race this year.

Dr. Sullivan and his wife Ginger founded the race in 1989, the year that he became a member of George H.W. Bush’s cabinet as the Secretary of the U.S. Department of Health and Human Services. He said that it started as a way to become better acquainted with members of his department and a way to raise awareness for his employees to practice what they preach, which is promoting a healthy standard of living. 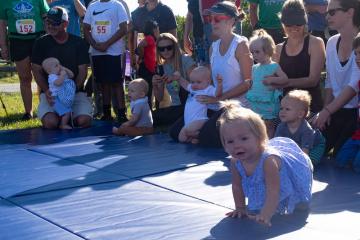 Never too early to spread the joy of fitness; event always begins with the diaper run. -Mark Alan Lovewell

The first year Dr. Sullivan expected 15 people to attend, but well over 50 showed up. Since 1989 the race has become an institutional end-of-the-summer event with over 300 participants gathering on Saturday to raise funds for the Martha’s Vineyard Hospital.

Over the years, the Sullivan 5K has raised over $700,000 for the hospital through donations, sponsorships and registrations.

Seated on his walker before the start of the race, rightfully wearing the number one bib, Dr. Sullivan reflected on the long history of his race.

“It’s become a family event, with everyone from the diaper derby to 94 year-old Jerry Wyner,” Dr. Sullivan said. “What this race does, first it’s fun, but it also emphasizes the importance of healthy living. Walking or running are both part of the process that adds years to your life.” 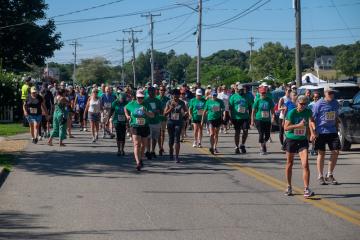 “But time passes,” he added. “It’s been about three years since I’ve been able to run or walk in the race myself.”

The leadership role for the Sullivan 5K, which will maintain its name even after Dr. Sullivan steps down, will be transferred to Dr. Pieter Pil, chief medical officer at the Martha’s Vineyard Hospital, who wore the number two bib on his chest.

“Dr. Pil is a great leader,” Dr. Sullivan said. “I know that he is someone who can continue to build on the tradition and carry the race to new heights.”

According to the tradition, the race starts in two heats with the walkers setting off 30 minutes before the runners. Surprisingly, it was a member of the walking, or speed-walking, heat that finished first.

Marston Clough, a 76 year-old Vineyard Haven took home the gold in a near photo finish with a time of 36:16. 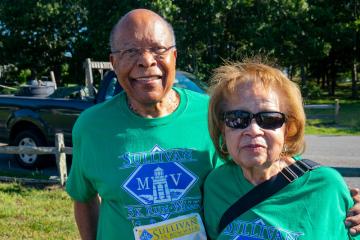 Dr. Sullivan and his wife Ginger started the race in 1989. — Mark Alan Lovewell

“It’s harder to walk fast than it is to jog slow,” Mr. Clough said between gulps of water. “But I feel lucky to be able to do it… and to be a part of all of this.”

The winner of the running heat was Ryan O’Connor, 38, from Bristol, Conn., clocking in at 17:58. This is the second year in a row that Mr. O’Connor has won the Sullivan 5K, though he added a few seconds since his victory last year, he said.

“This is only the second time I’ve even been on the Island, both times to race,” he said. “I guess I’m batting one-thousand.”

Though all the racers were competing for first, they were united in their front to support the local hospital.

“Luckily I’ve never had to use it,” said Louisa Clough, who crossed the finish line just two minutes after her husband. “But if we need a hospital, it’s always there. That is why we always come out to show our support.”

Since its incorporation in April 1921, Martha’s Vineyard Hospital has been committed to delivering high quality, compassionate medical care to each and every member of the Vineyard’s year-round and seasonal community, as well as all who visit here.

Your gift can help ensure that high quality care is never far away.